Comment are off
The Dating Coach
basketball, Lacrosse, popular sport in Canada, the perfect date 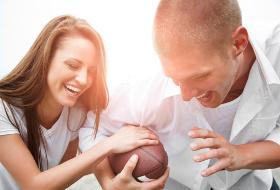 “Indulge in outdoor sports with your girl”

If you and the lady you’re dating haven’t played a lot of sports before, it’s never too late to start. Whether it’s a one-on-one game or an all-out co-ed team event, sports are a great way to spend time together and if your girl is athletic, it could be the perfect date. One-on-one sports are fun, but think about the benefits of a team. You and your girl could be on the same team against a few other friends, but keeping yourselves on opposite teams is a great way to induce a friendly rivalry. If you want, you could even make a bet with her: whoever wins buys drinks after the game. Normally, any attempt to get her to buy drinks when you go out would be seen as cheap, but trust us, in this case she won’t see it that way. This will be a challenge for her and she’ll love it. Additionally, if you play with teams and both of you bring along single friends, maybe they’ll meet someone new to spend time with.

If you both know how to maneuver on the ice, why not try a little hockey? It’s the most popular sport in Canada, so you’ve probably played it before. On the off chance you get a girl who’s never played, you will have to go a little easy on her since hockey can be such a ‘go hard or go home’ sport. You don’t want to be knocking each other over, so be nice. This is one that’s great played with teams of friends or one-on-one. If you choose to play with just the two of you for your date, you’re guaranteed to get your body moving and end up laughing. You don’t have to play by the typical rules if you’re just playing one-on-one; after all, it’s just to have fun. 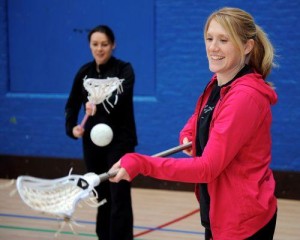 “Playing lacrosse could be fun”

Lacrosse is another great one for the Canadian summers. This is another huge, country-wide sport so you’re definitely going to be able to find some just-for-fun leagues to join if you and your girl want to make a series of recurring dates out of playing this sport. This is another one that’s a little harsher than your typical sports you might play on a date, so if your girl enjoys activities that get her up and moving but it is a little on the small, delicate side you might want to rethink hockey or lacrosse for her so she doesn’t get hurt. It does happen, and you don’t want to give her a memory by some injury.

If you want your athletic, sports date to be something different, there are always the old standbys: soccer, football, basketball or baseball. These are popular in most places, so just like with lacrosse; you’ll be able to find teams to play these with. If you ask her and she seems more into one of these sports, play this with her. Even if you would have rather played hockey or lacrosse, don’t force her to play something she doesn’t want to. Don’t be that jerk who doesn’t ever let his girl do anything fun she wants to do.

When To Ask Her to Move In