Comment are off
The Dating Coach
get upset, having a drink, introduce her to your friends, ready to get serious 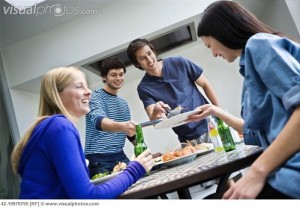 It’s inevitable. At some point, she’s going to meet your friends. If you have been dating her for a while, you might have worked up some kind of schedule with her. You probably have specific date nights set up with her few times a week, but you also have a few times where it’s designated time spent with your friends. Whether it’s watching sports on television, going out and having a drink, or actually getting out and playing a sport for your league with them. Eventually, she’ll get curious and want to know who it is you’re spending time with and she’ll probably ask you to meet them. It’s not an act committed out of jealousy, but simply a desire to want to get to know you better. Getting to know you means getting to know the people you call friends, so you should be flattered rather than scared that she wants to meet them. While it is serious, it’s not as serious as asking to meet your parents. Though, the question that comes up is when is it a good time for her to meet your friends? 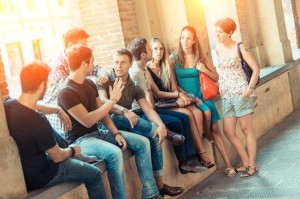 “Do not introduce her right in the beginning of your relationship”

On one hand, you’re probably thinking that you shouldn’t wait until she has to ask because then she might get upset. But the opposite is just as bad: introducing her to your friends before you’ve dated her for a while automatically sends a message that you’re ready to get serious right away. She’ll be a little overwhelmed, and your friends will undoubtedly be a little overbearing. Worse still, they might tell her embarrassing stories about you that it might just be too early in the relationship to hear. Maybe she won’t ask outright. She might just drop you hints that you’ll be expected to pick up on, and that’s when you know that she wants to meet your friends.

Ask Yourself When It’s Time

A good rule of thumb is to step back and ask yourself how you feel about this girl. If she’s just a girl whom you’re dating casually, then she probably doesn’t ever really need to meet your friends unless she’s got mutual friends. Then it’s a case where it’s not necessary to meet them, and it’s understood that she isn’t meeting them because she’s your girlfriend. If she’s a more serious relationship and it’s been a few dates (and therefore, probably a few weeks) then it’s probably safe to introduce her to your friends. You don’t want the first time she meets them to be your sports-watching party, because both her and your friends will probably resent that little intrusion. A good suggestion to introduce them is going out to grab a bite to eat at a low-key, laid-back restaurant where you’re paying for hers and they’re paying for theirs. Nothing too fancy, just a good enough place so she can talk to them and they can talk to her. Just don’t let them give you opinions on her while she’s still there as some guys do. Wait until you’re by yourself or she’ll end up feeling self-conscious.

When To Ask Her to Move In