5 Small Displays of Affection to Make Her Swoon

Comment are off
The Dating Coach
kiss on the cheek, look into her eyes, make her swoon, touching her 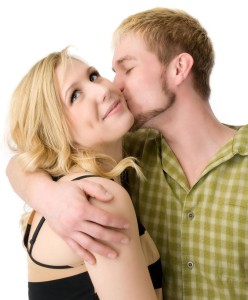 “Kiss her on the cheek”

When you get a new girlfriend, it’s hard to keep her without trying too hard. If you try too hard, it just seems fake and she’ll be put off. Try doing simple things for her here and there so that she knows you’re thinking of her, but aren’t being perfect for her. These five simple displays of affection will let her know that you’re totally into her without being over the top and obnoxious.

When she’s sitting across you at a table, look into her eyes and brush a piece of hair over her ear. Alternatively, when she’s sitting next to you on the couch, just stroking her hair can do wonders for you. This subtle bit of grooming tells your girl that she’s on your mind, and that you want to take care of her.

When you reach for her hand and she isn’t expecting it, it’ll send a jolt up her spine and straight into her heart. If you hold her hand whenever you can without her reaching for it first, it shows her that you just can’t stop touching her to save your life. That might seem creepy to you, but to her it’s an incredibly romantic gesture, and she won’t be able to stop cooing over it. Not to mention, she’ll even brag it to her friends.

Kissing her on the cheek isn’t too intimate, so it doesn’t denote anything sexual, which is reassuring for a new girlfriend. If she’s sitting on the couch, just swoop by and give her a soft kiss on the cheek. It’s sweet and leaves her wanting more; so if you want to move things faster, this is a good plan. By not making her feel obligated to take it further, it’s a sort of reverse psychology that plays perfectly into your hands.

If you’re walking by her, behind her, or if you just want her to move, patting her on the side is a romantic way to get her out of your way. Her side is an incredibly sensitive location that isn’t taboo to be touching in public, even at such an early stage in your relationship. It tells her that you might be interested in something more without being too forward, and it’ll have her biting her lip trying not to moan. 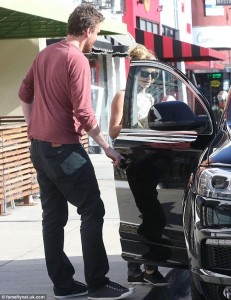 Show your girlfriend that chivalry is far from dead by holding the door open for her whenever you can. This has gotten a sort of stigma lately as being vaguely sexist, but your girlfriend won’t see it that way. It’s just common courtesy, and it’ll make her swoon to see you rush ahead of her to get the door before she has to pull it open herself. This doesn’t work so well for car doors, at least when she’s getting out – it’s a little too obvious that you’re trying if you race over to the passenger door before she can get out. Do it when she’s going into a shop or getting into the car instead.